WELCOME TO THE TOWN OF MURPHY, NC

Downtown is beautiful with flower and tree lined streets and many historic buildings restored to their original state. Murphy has restaurants, many unique shops, and other interesting establishments all within walking distance in the heart of town.

Recreational activities are unlimited from local trout streams to mountain biking. Hiwassee Lake is considered one of the most beautiful in the state. Murphy offers something for every sports enthusiast.If you are looking for a beautiful small town in the mountains, look no further. Murphy with its population of 1700 people resembles a Norman Rockwell painting. It is indeed, small town life at the very best. We look forward to seeing you! 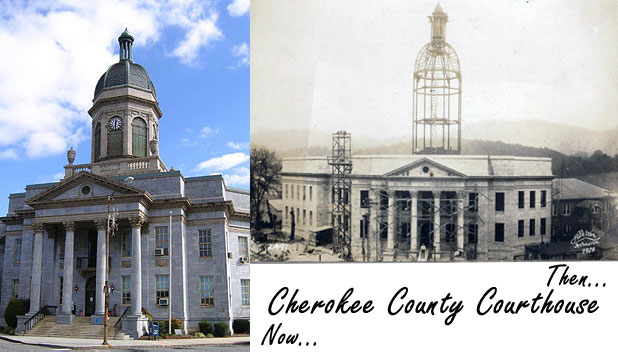 The site of Murphy, along the Hiwassee River, was known to the Cherokee as Tlanusi-yi (the Leech Place), because of a legend about a giant leech named Tlanusi that lived in the river there.  The Trading Path (later called the "Unicoi Turnpike") passed by the future site of Murphy, connecting the Cherokee lands east of the mountains with the "Overhill Towns" of Tennessee.

The town was first called by the name of "Huntington" in the 1820s through the 1830s, when the first post office, operated by Col. Archibald Russell Spence Hunter was established. He was also the first white settler to build a frame house in the Cherokee Territory, later Cherokee County.

In 1836, during the Cherokee removal known as the Trail of Tears, the United States army built Fort Butler in what is today Murphy. Fort Butler acted as the main collection point for Cherokee east of the mountains. From Fort Butler the Cherokee were taken over the mountains on the Unicoi Turnpike to the main internment camps at Fort Cass (today Charleston, Tennessee). Today the Unicoi Turnpike is known as the Joe Brown Highway. Fort Butler is no longer a structure, but the site can be visited with historical markers to read. The Cherokee County Historical Museum located in Murphy provides information about the Trail of Tears.

Cherokee County was formed in 1839 from a portion of Macon County, but Murphy wasn't incorporated as the county seat until 1851.

Murphy was once the terminus of the two train lines. The Mineral Bluff, GA spur line (L&N Railroad) came out of North GA and the Murphy Branch (Southern Railroad) came from Asheville. The L&N line was removed in the mid 1980s. The tracks for the Murphy Branch remain but are inoperable. It has been idle since the mid 1990s when the Great Smoky Mountain Railroad discontinued service between Murphy and Andrews. The L&N Depot remains as a community center just southwest of downtown Murphy. Murphy was the home of the once well-known crafts manufacturer Margaret Studios, which operated a nationwide chain of gift stores for its woodcraft products and housewares, such as lazy Susans and gift trays.

Folklorist John Jacob Niles based his well-known Christmas song "I Wonder as I Wander" on a phrase he heard in a song sung by the young daughter of a group of traveling evangelists in downtown Murphy on July 16, 1933.

Architect James Baldwin designed the Cherokee County Courthouse, located in downtown Murphy, in a Beaux-Arts style. Built in 1927, it is faced with locally sourced blue marble and is listed in the National Register of Historic Places along with the Robert Lafayette Cooper House and Harshaw Chapel and Cemetery.

The town is located at the confluence of the Hiwassee River and Valley River.

Topography
Murphy is located in southwestern North Carolina, approximately halfway between Atlanta, Georgia and Knoxville, Tennessee. The location in the Blue Ridge Mountains has helped the community retain a fairly rural character, surrounded by wildlife such as bear, deer, fox and recently reintroduced elk.

Climate
Murphy has a humid subtropical climate, (Cfa) according to the Köppen classification, with hot, humid summers and cool to mild winters, with low temperatures significantly cooler than other parts of the Southeast, due in part to the elevation. Like the rest of the southeastern U.S., Murphy receives abundant rainfall, greatest in winter and enhanced by the elevation. Receiving as much as 100 inches per year in some parts, areas of Cherokee County are considered part of the Appalachian temperate rainforest.  Blizzards are rare but possible; the 1993 Storm of the Century dropped 15 inches (38 cm) in 24 hours with more snowfall continuing up to 38" in some areas, causing widespread power outages and natural disasters.